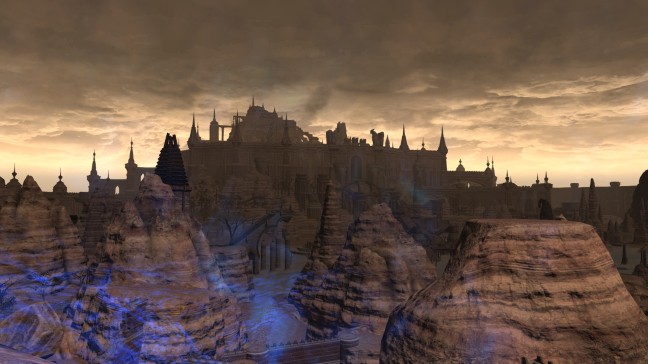 Spoiler warning: Though it has been about a month since Stormblood’s release, it feels prudent to place this here….just in case someone reads it.

It actually took a long time for me to warm up to Final Fantasy XIV. It’s not that I thought the game particularly bad at the outset (around 2.1), only that it didn’t capture my imagination. It was the music that turned the game from something of a slog to a joy. Sure, I had enjoyed music in the game prior, but it was the introduction of “Tricksome” for The Wanderer’s Palace HM that triggered something in me.

This was followed by the phenomenal soundtrack for Heavensward, which prompted me to start a playlist of my favorite tracks from the game (many thanks to Mekkah Dee for these uploads). Now, with the release of Stormblood, there’s a whole new soundtrack to enjoy.

The first major settlement the player reaches after entering Gyr Abania, the Reach is the home of the Ala Mhigan Resistance. For an organization that has only met with minimal success after two decades of occupation, I must admit that the theme is far more upbeat than anticipated. On the other hand, it instills the player with hope; great change is coming to Eorzea and we are at the forefront. One cannot help but be encouraged listening to this.

Before we can liberate Ala Mhigo, however, we first travel east, to distant Othard, to help our longtime ally and friend Yugiri liberate the nation of Doma. A good deal of the music in the east, from Kugane to the Azim, has an exotic feel to it, clearly inspired by the cultures of the orient. However, the theme that most drew me was that of Yanxia’s nighttime theme. A slow, somber piano piece, it almost feels a more fitting theme than the normal daytime theme.  The people of Doma have lost much in the quarter century of Garlean rule, a feeling far better reflected in the night. Yet even amid the ruins of a nation, the music carries with it a hopeful air.

The Temple of the Fist

While I am skipping ahead a bit to cover this one, I prefer the final two tracks of this group where they are. The Temple of the Fist is the former home of the Fist of Rhalgr, the order to which the Monks of Ala Mhigo (and, by extension, any Monk players) belong. If there’s any word that describes this theme, it is adventurous. It’s the sort of music that belongs to a temple hidden deep in a vast wilderness, where adventurers brave many great perils to reach it and the treasures hidden inside.

Actually, leaving aside the matter of Rhalgr’s Reach just below, that is precisely what the temple is. It is a theme that carries a feeling perfectly.

The liberation of Doma finally brings the player back to the Ala Mhigan front, where the Eorzean Alliance takes advantage of the Empire’s divided attention to strike straight for the city itself. At the very gates, we are greeted with this militaristic theme. Looming before the gathered forces of five nations, the imposing silhouette of the most impressive city state in the realm (at least to me). After a long journey fraught with peril and hard-fought battles, the end is in sight as we fight for the future of….

Twenty years: that’s how long the Empire has occupied this part of Eorzea. How long it has been since people like those of Little Ala Mhigo fled from the invaders. Since the Empire erected Baelsar’s Wall, hiding its deeds from the world to the west. Twenty long years since a proud people were laid low by the mightiest nation in the known world.

Alright, so before we get into it, I ought to address the elephant in the room, namely, where this post is located.

Part of the reason I stopped posting music blogs is because I hate Blogspot. A lot. Not only is it a poor service, but I feel like it makes everything posted on it look cheap and small, regardless of quality. The problem is that I have no place else to post these things…except here.

I waffled on making posts here for a long time, though, in no small part because between me and Shannon (the other person who writes on here), we tend to post more serious, politically and culturally minded content here (when we can be bothered). And I honestly am afraid to taint Oseron Phaer with that stink, even if I take the realm of the political very seriously. I suppose no small part of it is knowing that my politics are very different from those of many of the people I know and like online and I fear alienating them, not because I am ashamed of beliefs, but because of the polarization of the culture in which we live.

But very well. I shall bite the bullet and return to sharing the music that I love…even if it’s from video games. Games have some of the most amazing music I’ve ever had the pleasure of listening to and I must share that with the world.

Ah, Sohr Khai…like The Wanderer’s Palace HM, Sohr Khai is my second-favorite dungeon purely because of its theme. Visually, the dungeon is stunning, of course, as you battle above the clouds in a bid to prove your mettle to Hraesvelgr. The theme is what drives it home, though. With stunning piano work, sparse-but-haunting vocal work, and a fast pace that gives the dungeon momentum, “Apologies” is a theme I can listen to for hours on end without growing bored.

I honestly had a lot of trouble coming up with a fifth theme for this batch (yes, I know it’s the second, I reordered it), until I remembered this gem from 2.0. Honestly, any content released prior to 2.2 tends to get overlooked by me because of how unremarkable it all feels to me. It was fun, but nothing grabbed me like it should have. Indeed, this fact tends to make me think that the Ultima theme is too good for its fight; the fight does not live up to the weight and power contained within the music. All the elements of the piece combine perfectly to create an atmosphere for a titanic struggle against a foe beyond your ken.

This theme was something of a surprise when I reached the Heart of the Creator in patch 3.4. It’s not that there wasn’t precedent for a piece like this; Locus is fairly mellow, despite its harsh-ish instrumentation. But “Exponential Entropy” is a different animal entirely. There’s almost nothing about it that screams “YOU’RE FIGHTING A GIANT DEATH ROBOT.” Instead, it is a calm theme, relaxing in its repeating vocals:

Some might find that annoying after a point, but the song is a well-crafted piece and the repetition serves a vitally important role in making it work.

“Out of the Labyrinth”

I’ve posted before on how I believe that the Crystal Tower storyline is one of the best homages I’ve every had the joy of experiencing. Perhaps it is because the music in it recaptures many of my favorite themes from Final Fantasy III. The theme for Syrcus Tower (which is basically the Crystal Tower dungeon from III) is a perfect example of this. It takes a very fast paced theme and turns it into a slower, more epic version which better fits the pacing of the raid.

Another theme that surprised me in 3.4, the new boss theme is fantastic. I was never a big fan of “Ominous Prognostics;” something about it felt too hectic, which detracted from many boss fights. “Revenge Twofold” is nothing of the sort. Instead, the pace is slower and the instruments weightier, along with vocals that hearken back to “Imagination.” All the fights that use this theme feel like struggles, even though none of them are nearly as important as ones that came before.

Thanks for listening and I hope you’ll return for more vidya music!